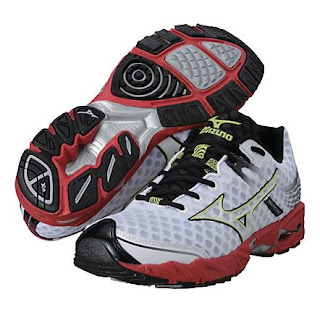 When I tested the Mizuno Wave Rider 15, I found myself unconsciously making a list of characteristics I wished the Rider had. I would be running and thinking, "Wow, I'd really like this shoe if it had this, and this, and this," hoping that the next iteration of the Rider would take on at least some of those features. Then I tried the Mizuno Wave Precision 12, and I realized that there was no need for me to make a list of what I hoped to see in the Rider 16. My list had pretty much described the existing Precision.

The Mizuno Wave Precision 12 is Mizuno's neutral performance trainer. The Precision weighs in at 9.6oz for a men's size 9 and 8.0oz for a women's size 8 and has an H-delt of 12mm. Running Warehouse describes the Precision as such:

The Precision 12 is a moderate feature, moderate neutral shoe designed for speedwork, racing and daily training. It is built with a semi-curved shape.
CUSHIONING
MIDSOLE
UPPER
OUTSOLE


The Precision is built off of a universal, semi-curved last and has a slightly sprung toe. The first thing I noticed when I put on the Precision is the upper. The upper is amazing. If there's one thing I have to give Mizuno, it's that they do a great job with their uppers, at least in the shoes that I've worn. The upper of the Precision feels like a slipper. It's a little roomier through the midfoot and forefoot than both the Mizuno Wave Ronin 4 and the Rider (As a performance trainer, I'd expect it to be roomier than the Ronin, but having a wider toebox than the Rider was an unexpected and welcome surprise), but it isn't roomy to the point of being baggy or sloppy either. The heel cup is also nice, and hugs my foot a little nicer than that of the Ronin (my one complaint about that shoe). The upper seems to breathe just fine too.


The responsiveness on the Precision is great for a performance trainer. You hit the ground, and you get a really quick response from the midsole. I'm not sure whether this response is from the Wave plate or the AP+ midsole material, but it's certainly there. The Wave plate is a little deeper than that of the Ronin, but much smaller and less obtrusive than that of the Rider. This shoe puts the "performance" in "performance trainer." However, this responsiveness does come at a price, and that's the fact that the cushioning is super firm. I've heard a few people call this shoe "soft," and granted, it's soft if you compare it to the Ronin, and it's soft if you're doing track intervals or racing half-marathons in it, but those people must be more efficient than me or something, because I found it a little unforgiving to use on recovery days (but then again, a performance trainer isn't really an easy day shoe, it's just that the Brooks Launch is soft and structured enough that I've been using that for easy days too). As far as performance trainers go, this shoe feels fast, so if you're looking for a trainer that prioritizes speed over forgiveness, the Precision should be on your shortlist. Again, it's no flat, not by any stretch of the imagination, but as far as trainers go, the Precision feels pretty fast. The Precision also has a nice, smooth ride and quick transition. I didn't find the ride quite as fast or as seamless as that of the Ronin, but I probably shouldn't be comparing flats and trainers anyway.


The Precision is a pretty flexible shoe, as I'd expect for a neutral performance trainer. The forefoot is very flexible, and torsionally, it's probably similar to the Brooks PureFlow, since the Wave plate is cut at an angle such that it doesn't limit flexibility the way it does in the Rider. One difference between the Precision and the other shoes that I'm wearing is that it has a smooth flex throughout the entire forefoot as opposed to flexing mainly at the flex grooves. It has flex grooves, it just doesn't seem to flex more at those points than at places without the flex grooves. Most people probably won't notice a difference, but someone who finds the joints of their feet not matching up nicely with the flex grooves may appreciate this feature. It does not have the Flex Controllers that the Rider and Ronin have if that is a concern.


The Precision has a fairly stiff heel counter to provide some rearfoot support. However, as far as support goes, you're not going to find a whole lot. Slightly more than most flats, but less than many other neutral trainers. Heelstrikers who mildly overpronate very early may get a little bit of support from the Wave plate (which is pretty stiff, but is also only in the very rear of the shoe), but forefoot strikers, midfoot strikers, and late overpronators will find a mostly neutral ride, with only a small amount of inherent support coming from a fairly flexible midsole and mostly unstuctured upper. In general, overpronators may be happier in the Precision's lighter and more supportive cousin, the Mizuno Wave Elixir 7. Alternately, overpronators could try putting an over the counter orthotic in the Precision (not something I had thought of myself, but a fellow runner informed me that this combo works well for him). Additionally, the Precision has very little arch support. On a whole, I found it slightly less stable/more neutral (however you'd like to put it) than the Launch through the mid and forefoot.

The Precision's balance feels a little off, and it feels slightly back-heavy. It's a minor gripe, but it is noticeable after running in them for a while.

No real data on durability yet, other than it seems to be wearing at the same rate as my other trainers.


Like other Mizuno shoes, the Precision has the horseshoe shaped heel and a groove in which rocks can potentially get lodged. The Precision's is a little deeper than that of the Ronin, and I get rocks in there more often than I do with the Ronin, but most of them end up not sticking out of the shoe so I can just wait until I'm done running to take them out.

The Precision is a responsive performance trainer that prioritizes speed over forgiveness. For the neutral, biomechanically efficient runner looking for a fast-feeling every day trainer, this shoe is a dream come true. It's also a good choice for someone who prefers a performance trainer over a flat for tempo runs and long races, and could also be considered for someone who is used to a regular trainer but for whatever reason wants to step down to a "less shoe" trainer that is lighter, more flexible, and less supportive. The back-heaviness is a little bit of an issue, but not a deal breaker. Will it replace the Launch as my every day trainer? Nope, sometimes I need that soft, forgiving cushion. Will they make my rotation for when I want something faster than the Launch, and will I buy another pair when these wear out? Absolutely.

Full disclosure: I have received the Precision free of charge in exchange for a review as part of a feedback program Mizuno and Mizuno guy Seth Hasty are running. The opinions expressed in this review are mine and based on my experience, and do not reflect the opinions of Mizuno or anyone else.
Posted by Unknown at 8:31 PM